Ever since it was first invented writing has remained, throughout the written history of mankind, an important tool for expressing the self and for making manifest ones own existence in the world. This is even more obvious today, in our digital world where mostly everyone expresses themselves in writing, in a much less congruent fashion than ever before, in various digital media.

The Faculty of Languages at Uppsala University comprises large groups of researchers active with research into different languages, from a range of time periods. Many of these researchers work with early languages, and the codification of languages in different forms of writing. The research environment WALC (Writing and Language Codification) is a network for scholars from different disciplines, united through a shared interest in the history of writing and the semantic, cultural, religious, and political functions of the written sign. 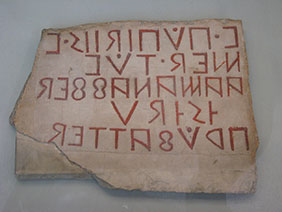 The workshop addresses the kind of situations that occur in the meeting or co-existence of different writings systems, or situations in which a script originally devised for the writing of one language becomes used for the writing down of another. The workshop invite speakers working with different types of language material, from a range of time periods. The joint question is the use of different writing systems, and the ”tensions" between a given language and the script used for writing it, whether freely chosen or forcibly imposed.